Trends, events and developments in the UK energy sector.

TRYING TO FIND A SILVER LINING

A crisis within a crisis 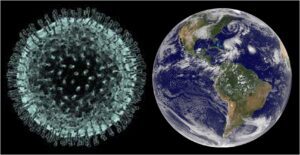 The sudden onset and sheer scale of the coronavirus pandemic has quite rightly preoccupied governments, businesses and populations across the planet. But it hasn’t made the climate crisis go away.

Greta Thunberg’s exhortation to “act like your house is on fire” rang universally true for COVID-19. There was no quibbling over whether it really was an emergency. And the speed with which the world mobilised to deal with it was a lesson for those who’d spent years consigning climate change to the “too difficult” pile.

While the economic impact of the pandemic has slowed the global deployment of renewables, there are encouraging signs that long-term net zero ambitions will not be abandoned in the face of near-term recession.

This crisis has forced many to re-evaluate their priorities and to question which bits of “normal life” we really want to return to. That recalibration could prove vital in maintaining the focus and belief that will be needed if we are to be successful in dealing with the climate emergency.

Lockdown causes drop in emissions – but will it make a difference? 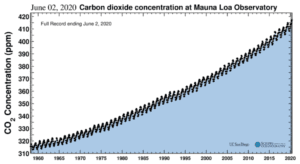 Over the past few months, as almost every country has been through some form of lockdown, the drop in industrial output, travel, and energy demand has resulted in a significant reduction in global carbon emissions.

At the point of peak lockdown, in early April, daily emissions were 17% below their level of a year earlier. In the UK that figure was 34%.

But carbon emissions are only part of the story. The more important measure is the concentration of CO2 in the atmosphere, because that’s what’s driving global warming. And the depressing fact is that CO2 levels will continue to rise despite the cut in emissions – albeit by only 2.48 parts per million (ppm) as opposed to the 2.8ppm that was forecast pre-lockdown.

To put that into context, 2019 saw CO2 concentrations reach 411ppm – up from 316ppm in 1959. It has risen every year on record, at an accelerating rate. All the lockdown did was slow the rate of acceleration.

For a much more detailed analysis, check out the outstanding work at Carbon Brief. 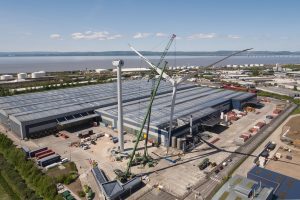 As the focus shifts from crisis management to reinvigorating a stalled economy, demands are growing for climate action to be at the heart of any recovery package.

Banks, businesses, populations and governments have all highlighted the need – and their own commitment – to “build back better”.

From EDF to Electrolux, over 150 corporations worth US$ 2.4 trillion and representing 5 million employees, signed a statement urging governments to align their recovery efforts with the latest climate science.

200 medical organisations, representing 40 million health workers (about half the global workforce) signed an open letter to the G20 leaders, urging them to involve medical and scientific advisers in devising stimulus packages, and demanding reforms to fossil fuel subsidies.

The head of the International Energy Agency (IEA), Fatih Birol, urged political and financial leaders to design sustainable stimulus packages, saying this was “a historic opportunity … to reduce dirty investments and accelerate the energy transition.”

In an open letter to Boris Johnson, the Committee on Climate Change called for low carbon and climate-resilient infrastructure to be at the heart of the government’s approach to rebuilding the UK after COVID-19.

And, if you searched really hard in the UK government’s COVID-19 Recovery Strategy you could find (on page 45 of 51) a commitment “to deliver a UK and world economy which is stronger, cleaner, more sustainable and more resilient.” Of course we still need to find out how they plan to achieve that.

MORE RENEWABLES, MORE OF THE TIME 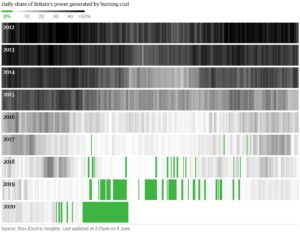 This February was officially the wettest on record. And those rains were carried in by some mighty winds, which made it a historically productive month for renewable generation.

With three named storms in three weeks (remember Ciara, Dennis and Jorge?) the UK’s turbines turned out a record 6.9 terawatts of power.

Once the floods had receded, March, April and May all registered record levels of sunshine and solar generation, with May becoming the sunniest calendar month on record, generating close to 2 terawatts and peaking at one third of UK electricity demand.

While renewables were on a surge, old king coal was setting a record of an entirely different kind. Starting on 10 April, coal contributed precisely 0% to the UK’s power generation. And this has continued for day after day after day – approaching the two month mark at the time of writing.

With records being set for the UK’s solar and wind generation, it may not be a surprise that the first three months of the year saw fossil fuels fall behind renewables for the first time. But it’s a significant milestone nonetheless.

So just take a moment to enjoy this graph from Drax Electric Insights: 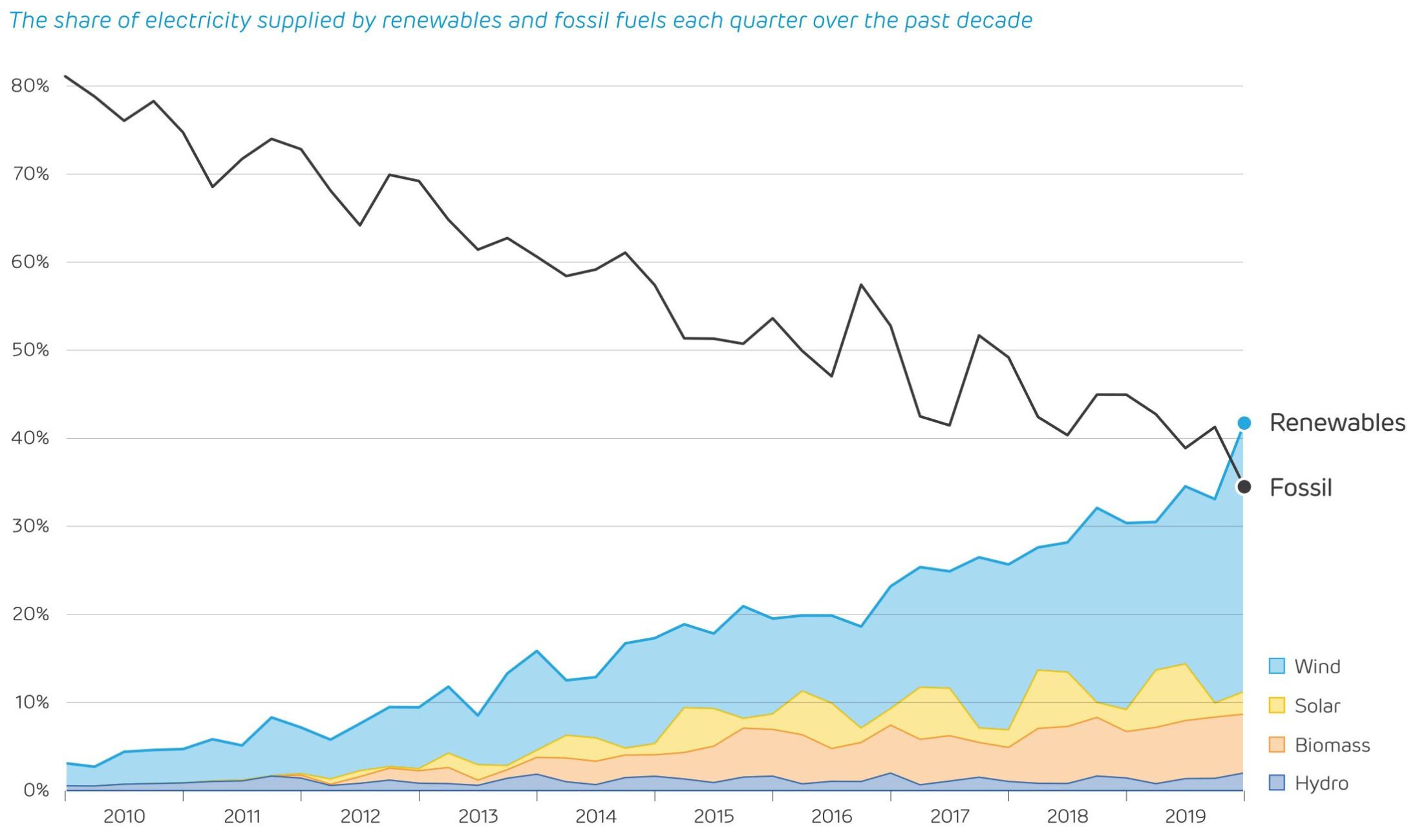 Amid the success stories for renewables, however, there are worrying signs that the economic hit from the pandemic will put a brake on progress.

The International Energy Agency (IEA) reported that deployment of renewable energy in 2020 will be below last year’s levels – the first reversal in this trend in nearly 20 years. But they also highlight the fact that global investment in clean energy has been flat for five years, and continues to fall well short of what’s needed for an effective reduction in emissions.

On the upside, renewables have fared much better than fossil fuels, with the IEA describing cuts in investment as “particularly brutal” in the oil and gas sector.

This is echoed by BlackRock, who point to greater investor confidence in sustainable funds over more traditional ones during this period of market turmoil. In their words, the evidence “upends an oft-cited concern pre-COVID crisis that during sharp market downturns, investors will de-prioritize sustainability.” 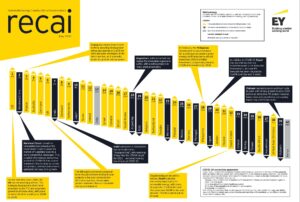 Rising to sixth position in the rankings, the UK has benefited from what EY describes as the British government’s “milestone proposal” to bring onshore wind and solar back into the mix for the next round of Contracts for Difference (CFD) auctions.

As new onshore wind and solar PV can generate power more cheaply than the cheapest fossil fuel alternatives, this is a win-win for investors, energy consumers and the planet.

Carney: net zero is “greatest commercial opportunity of our time”

Having previously warned that companies will “go bankrupt” if they fail to work towards net zero, Mark Carney has deployed the carrot to go with the stick, stating that the transition to carbon neutrality represents “the greatest commercial opportunity of our time.”

Having taken on the role of finance advisor for the UK presidency of COP26, the erstwhile governor of the Bank of England is well versed in the economics of climate change. And he is under no illusions about the scale of the challenge.

“Achieving net zero will require a whole economy transition,” he said. “Every company, every bank, every insurer and investor will have to adjust their business models.”

The economic upheaval from COVID-19 can only have reinforced the belief that wholesale systemic change is needed – and that the rewards for the successful will be vast.

Poachers turned gamekeepers – or a load of greenwash?

“We aim to be a net-zero emissions energy business by 2050 or sooner.”
“The direction is set. We are heading to net zero. There is no turning back.”
“The world must be prepared to sacrifice growth to achieve climate goals.”
“We cannot rule out catastrophic outcomes where human life as we know it is threatened.”

These are not companies prone to hyperbole over climate change, which makes these bold statements noteworthy.

What’s important, of course, is that their actions match their words. Which, of course, remains to be seen.

KEEPING THE LIGHTS ON THROUGH LOCKDOWN

Patience and persistence pay off for Sonardyne solar

Thwarted for three years by a lack of grid capacity, we recently managed to complete the installation of half a megawatt of solar PV on Sonardyne’s global HQ.

The project started back in 2016, but fault level issues at the nearby substation meant that SSE was unable to provide a connection until upgrade works had been completed. So we all had to wait.

We’ve completed a number of projects that other renewables companies had failed to finish.

Most commonly, they’ve walked away after planning consent but before breaking ground. But wiith the Burnbrae and Afton Lea turbines, the original developer managed to erect them and qualify for the Feed-in Tariff before realising they’d bitten off more than they could chew.

Here’s how we finished the job.

YOUR REGULAR REMINDER OF WHY ALL THIS IS IMPORTANT

How big is a gigaton of ice? 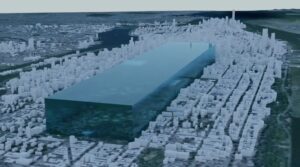 According to satellite data, the Greenland ice sheet is melting six times faster than it was in the 1990s, and is losing 280 gigatonnes of ice per year.

So how big is just one gigatonne? Well NASA dropped one into Central Park so you could see for yourself. (Spoiler alert: it’s over a thousand feet high.)