This week saw the arrival of the longest turbine blades to go into commercial operation on UK soil.

At 68 metres long the swept area of these blades will be the equivalent of two Wembley football pitches, and the total height of the finished turbine will be fully 150m (just under 500 feet).

With blades of this magnitude, navigating the road network becomes especially challenging. So we shipped them an extra 500 miles by sea around the south of England and into Bristol’s Avonmouth Dock.

This left just 20 miles for us to negotiate by road to the turbine site near Magor in south Wales. While it made for some short-lived lunchtime tailbacks on the M4, it was a much simpler and less disruptive approach than the conventional trip across the country from an east coast port. 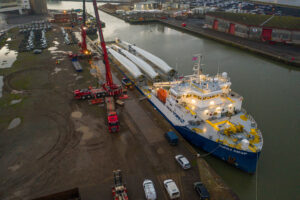 As Dean Robson, the CleanEarth Managing Director, explains, “moving equipment of this scale is a serious challenge, and we try to minimise disruption where possible. The Port of Bristol was ideally placed”.

The blades are part of a project owned and managed by CleanEarth, to generate renewable electricity into the AB InBev brewery at Magor.
Their massive wingspan will very efficiently harness the available wind and generate up to 3.5MW of electricity. The turbine will supply nearly a quarter of the brewery’s electricity demand, while also saving over 2,600 tonnes of carbon annually.

It will also assist in the production of around 10 million bottles of beer – mostly Budweiser and Stella Artois – each year.

Private wire, behind the meter

The turbine will be located 2km from the brewery and serve the plant via a direct wire. ‘Behind the meter’ arrangements like this are growing in number as businesses recognise the benefits of self-generation in meeting sustainability targets and managing their energy costs.

“Private wire installations work,” says Robson. “Especially for organisations with strong environmental credentials such as ABI and Accolade Wines (who we did a similar project for last year) because sourcing green electricity is a fundamental requirement and can be coupled with an improvement in the operational cost base”.

The final assembly should take place over the next two weeks, with energisation of the turbine due before Christmas. 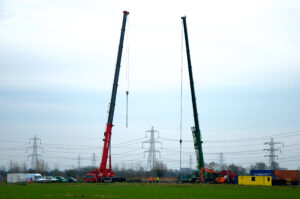