Despite the prevailing chaos in the world, 2021 has started well for CleanEarth, with projects for four wind turbines receiving planning permission.

When commissioned, these turbines will add to our ever-increasing Scottish portfolio, which is forecast to generate in excess of 200 GWh per year by 2025. This is already making a significant contribution to the forward-thinking environmental targets north of the border.

Not taking ‘no’ for an answer

Two of the projects in particular called on all our dogged determination to see them over the line for planning consent.

The planning applications for the Meikleton turbine in Aberdeenshire and the West Dykes project in South Lanarkshire were initially rejected – unfairly and inappropriately in our view.

In such circumstances CleanEarth will never give up without a fight, and the arguments and rationale we put forward were accepted on appeal.

The West Dykes turbine will successfully complete a group of projects that we recently acquired – all of which had been, prior to CleanEarth involvement, at a depressing standstill for several years. 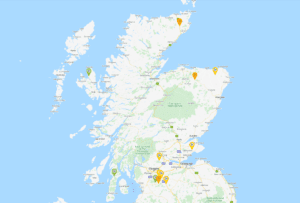 Less than 20 miles from John o’Groats, the approved twin turbines at Tacher are about as far from CleanEarth’s Cornwall HQ as they could be. Our most southerly installation is a 250 kW solar project 20 miles from Land’s End, so we really do cover the length and breadth of mainland Britain.

As these newly approved projects move into the construction phase, CleanEarth have an ever-increasing number of projects entering planning throughout Scotland, Wales and England. While some of these are for single turbines, the majority are multiple sites, reflecting CleanEarth’s transition into successful wind farm development.

It looks like it will be a busy year.