The 2008 Climate Change Act celebrated its 10th birthday at the end of November.

A few days earlier Chris Stark, chief executive of the Committee on Climate Change, gave a presentation to delegates at the Energy Management Exhibition (EMEX), reflecting on the achievements of the previous decade.

CleanEarth were there, and here’s what we took from his frank and thought-provoking talk.

The central idea of the Act was that parliament needed to set a long-term target to reduce emissions, that this was not something to be viewed through the lens of a single term of office.

A 43% fall in greenhouse gas emissions since 1990 suggests this policy has been effective. And GDP growth of 70% in the same period shows that it is genuinely possible to decarbonise without it being a brake on the economy.

Much of this has been possible because the assumptions on costs back in 2008 were “miles out”. New technologies have been developed that are far cheaper than forecast, transforming the outlook and providing some grounds for optimism.

The global response to the problem has, however, fallen far short of what is needed.

According to a recent UN report, the world’s governments are “nowhere near on track” to meet their commitments to keep warming below 1.5C.

And the IPCC’s special report in October made it clear that the impact of climate change would be far greater – and the timeframe for action far shorter – than previously thought.

As Chris Stark soberly put it, looking back to 2008, “we were wrong about the risks”.

The bulk of the UK’s emissions reduction has come from the growth in renewable power generation, followed by waste and industry.

But we can’t rely on just one or two sectors to do the heavy lifting. Even if we switched to 100% renewable generation overnight, we would reduce our total greenhouse gas emissions by less than 20%.

So the next big target, according to Stark, “has to be transport”.

Here the agenda is currently driven more by concerns about air quality than global warming, but there are encouraging signs that electric vehicles will be adopted far faster than was imaginable even a few short months ago.

Changes in transport are also being driven much harder by our cities than by central government, and Stark stressed the importance of taking action at every level and scale, from the national down to the municipal, and even to the local and individual. 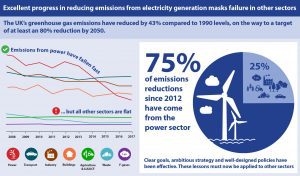 In addition to transport, we also need look at changes in land use, industry and buildings. Major societal changes will be required in many areas of our everyday lives, and the time left to effect these changes is scarily short.

On the upside, Stark said that the idea of setting even more ambitious targets was gaining traction.

The 2008 Climate Change Act set a target of an 80% reduction in emissions by 2050. Ten years on, there is a growing belief that we should be aiming for net zero. And Stark hinted that the Committee on Climate Change may soon find itself recommending just that to parliament.

The biggest problem is politics

While we’ve seen a major shift in public perception and understanding of global warming, the political response has continued to be muted and muddled.

Chris Stark – whose job it is to advise our elected representatives on this most vital of issues – did not mince his words. “The main barrier to tackling climate change,” he said, “is politics.”

He had opened his talk by contrasting the rare unanimity of parliament ten years ago with today’s brexit-induced omnishambles (even if he didn’t put it quite like that).

It was striking, he said, that in 2008 only five MPs voted against the Climate Change Act.

Today, depressingly, you’d be hard-pressed to find five of them who were prepared to agree with each other about anything.