Big uptick for CleanEarth solar in 2019

Last year CleanEarth’s solar PV business delivered a sizeable increase on the previous year, giving us our best results for solar since 2015.

This comes after several turbulent years for the solar PV industry. Abrupt changes to the programme of government incentives, culminating in last April’s elimination of the Feed-in Tariff, saw many businesses struggling to adjust to the new economic reality.

Our results were underpinned by projects across the south of England, the Midlands and south Wales for businesses that ranged from print companies to clinical trials specialists. And 2020 looks to be maintaining the momentum, with our build team scheduling installations well into Q2.

While last year was a decent one for CleanEarth, the industry as a whole was less fortunate. 2019 saw just 200 MW added to the UK’s solar capacity – an increase of only 2% on the previous year’s installed base. 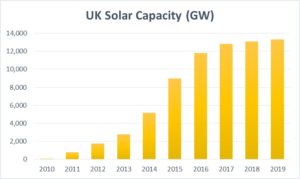 This contrasts with the dramatic jumps we saw earlier in the decade, with increases of 87% and 74% back in 2014/15. The graph of solar capacity shows the recent flatlining, with only 1.5 GW of the UK’s 13 GW being installed over the last three years.

This trend is especially worrying given the government’s much vaunted ‘net zero’ commitment. That curve really needs to start trending upwards again, and fast, if we are to stand a chance of meeting our decarbonisation targets.

Where solar PV is being deployed, though, there is plenty of good news.

Looking back at some of our recent projects we have seen a trend of installations consistently exceeding forecasts, giving greater financial and carbon savings to our clients.

As an example, the 250 kW system CleanEarth installed at Sharp Clinical Services back in March 2019 had already hit its annual target by November – three months early – making Sharp’s new European HQ more than 20% self-sufficient and saving them around £30,000 per year.

According to Ed Lennon, CleanEarth’s Commercial Manager, there are two main reasons behind this. One is that the quality and efficiency of PV panels keeps improving.

“We are seeing a trend towards higher efficiency monocrystalline modules with lower degradation rates,” says Lennon. “We can generate around 30% more per square metre than we could five years ago. And inverters are more reliable than ever, with longer warranties, less downtime and greater system efficiency.”

The second reason is CleanEarth’s conservative approach to forecasts. “We are ruthlessly realistic in our performance calculations,” says Lennon. “With elements like solar irradiance levels (or ‘sunshine’) out of our control, we err on the side of caution so that any deviation from forecast is almost always a positive.”

With over 1 MW of rooftop solar being built out in Q1 and several larger projects in the pipeline, the new decade has got off to a promising start for CleanEarth.

We have also been back to several existing clients who are either extending their original PV systems or installing on new buildings. Cladco Profiles, for example, have just added 70 kW to the 50 kW system that CleanEarth installed back in 2016.

The big question, however, is whether the wider market for solar PV will show the kind of growth rates that the country’s decarbonisation plan demands.

The Solar Trade Organisation’s forecasts are not optimistic. We’ll need more than 40 GW of solar PV by 2030 just to stay on track with current carbon budgets, and the STA sees less than half of this being deployed unless major changes are made to policy and regulation.

In the STA’s words, “it is time to match ambition with action.”