It’s not just the big multi-national brewers who are investing in renewable energy. We’ve recently completed solar installations for a couple of the UK’s finest craft beer producers.

From humble beginnings in the founder’s kitchen, Verdant are now proud occupants of 1,500m2 premises in Penryn. Prior to moving in, they embarked on a complete refurbishment of the site, including the installation of a 67 kWp solar PV system on the building’s roof.

The refurb called for a strong visual style that the solar PV needed to complement. The logistics were also demanding, as the installation needed to dovetail with the main refurbishment project plan. This required detailed liaison with the various on-site contractors, and a very tight timeframe.

Verdant founder, James Heffron was delighted with how smoothly the installation went. “Ed and the rest of the CleanEarth team clearly grasped the logistical complexities of the project,” he says. “It was reassuring for us to know they had the experience and the can-do attitude that the job demanded.”

Completing the installation didn’t mean that our work was done, as CleanEarth have taken on the daily monitoring and maintenance of the system to maximise output and minimise any system downtime.

And in order to make the most of every single “drop” of electricity, we are now working with Verdant to incorporate a solar diverter that will use excess solar generation at the weekend to heat water for brewing. 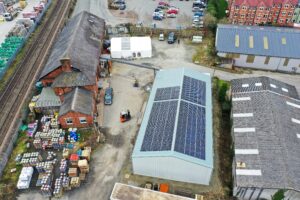 Having operated out of their converted Victorian railway shed since 2008, Ludlow Brewing Co added an adjacent cold storage unit in 2015 – the roof of which was tailor-made for installing solar panels.

When Owner Gary Walters contacted CleanEarth for a quote, he was encouraged to learn that the project was eligible for a grant from the Marches Renewable Energy project (MarRE). With experience of funding schemes in several counties across England and Wales, our team were able to help with the grant application as well as the system’s design and installation.

“Their attention to detail and obvious technical expertise gave us confidence,” says Gary. “And it did no harm that they were competitive on price too!”

With 50% funding from MarRE, the payback period on Ludlow Brewing Co’s investment dropped to below three years. And their unit cost of electricity plummetted to just 3.6p per kWh – the kind of rate normally only enjoyed by the very largest industrial energy users.

The system was designed so that close to 100% of its generating output is consumed on-site, and it will meet between 10% and 20% of the brewery’s power demand. It will also play a key role in Ludlow’s end goal of brewing from 100% renewable energy.