Trends, events and developments in the UK energy sector. 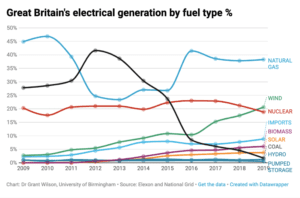 Let’s start with something positive.

2019 saw wind power moving up to second place in the UK’s generating league table, supplying 21% of the country’s electrical demand. That’s a sevenfold increase on a decade earlier.

As reported by the UK Energy Research Centre, natural gas is still out in front with 38%, but that’s down from 47% in 2010, while coal – which used to provide nearly half our electricity – has pretty much vanished from the scene.

The rise of renewables also saw them supplying more electricity than nuclear for the past eighteen months, a trend that looks set to continue.

Records tumbled throughout 2019. A sunny May generated a new high for solar power of nearly 10 GW. August 17 saw the lowest carbon intensity since the Industrial Revolution (57 gCO2/kWh). And on one breezy day in early December, Storm Atiyah helped wind power to contribute 44% of the nation’s electricity.

But low-carbon generation stalls in 2019

While renewables grew as a percentage of total generation, this was down to a continuing decline in demand more than any increase in carbon-free capacity.

Demand in 2019 dropped 3% on the previous year, while low-carbon output rose by less than 1%. This was the smallest annual increase in a decade.

Analysis by Carbon Brief highlights the need to accelerate the expansion of renewable generation, especially as old nuclear plants come up for retirement. They estimate that we’ll need at least 15 TWh of new renewable capacity every year through to 2030 just to meet the outdated target of cutting emissions by 80% by 2050.

RenewableUK pointed to failures in government policy as the culprit, with onshore wind being the sector most poorly served.

As Rebecca Williams, RenewableUK’s Head of Policy said: “This is a flashing red warning light on our net zero dashboard and we urgently need a new strategy from government. Onshore wind is one of the cheapest low carbon technologies in the UK, quick to build, and … 78% of people support it.”

The Green Alliance has compared the government’s policy commitments with what’s needed to achieve net zero by 2050 and, to no-one’s surprise, identified a sizeable gap. According to their policy tracker we need to be spending two and a half times the £16.75bn that’s currently being spent each year on tackling the climate emergency.

WHAT IT MEANS FOR BUSINESS

THE STAKES GET HIGHER, BUT ACTION LAGS BEHIND AMBITION 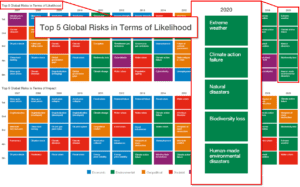 The governor of the Bank of England has warned that businesses need to work towards net zero emissions or face fatal punishment from investors and the market. “Companies that don’t adapt will go bankrupt without question.”

Carney explained that some industries and companies could do very well, as long as they make themselves part of the solution. “But there will also be ones that lag behind,” he warned, “and they will be punished.”

This stark prediction was echoed by Larry Fink, CEO of BlackRock – the world’s largest asset manager. In his annual letter to investors, Fink said that climate change will precipitate a “fundamental reshaping of finance” and that this will take place “sooner than most anticipate”.

Neither BlackRock nor the Bank of England are known for their climate activism or their tendency to exaggerate, so these are warnings that business leaders and investors cannot afford to ignore.

Over a third of UK businesses have set themselves net zero targets that meet or improve on the government’s 2050 deadline. But nearly half of them say they lack the time, resources or expertise to develop a plan to achieve this.

Recent research by Mitie revealed that the majority were hoping to achieve carbon neutrality well ahead of the government’s 2050 target, with 58% aiming for 2025 or earlier. While that’s a laudable ambition, however, they were worryingly shy of revealing how it would be achieved.

Edie’s Sustainable Business Leadership Survey gives some insight into why businesses are finding this so hard, with 39% citing “business growth and short-termism” as the biggest barrier to becoming more sustainable. The need for behavioural change, along with the usual suspect, cost, were also high on the list, each at 31%.

The good news is that 82% claimed their organisation would be more committed to sustainability in 2020.

But with only one in fifteen UK CEOs having environmental KPIs linked to their bonuses, it’s surely time to use the lever of executive incentives to help drive the necessary change.

MORE TEMPERATURE RECORDS BROKEN, BUT MAYBE EMISSIONS ARE ABOUT TO PEAK 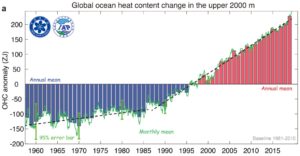 It was only the second hottest on record, but was still the hottest we’ve had in the absence of a big El Nino event. So the trend is inexorably upward.

Last year was pretty much one full degree warmer than the mean for 1951-1980 (0.98 deg C if you’re being picky) which made the last five years the warmest of the last 140 years.

We should probably get used to the idea that 2019 was one of the coldest years of the next 140.

And more than 90% of that excess heat ends up in our oceans. Last year was the warmest on record for oceanic temperature, and the ten warmest years have all occurred … you guessed it: in the last ten years.

What’s really scary is that the rate of warming between 1987 and 2019 was four-and-a-half times what was recorded from 1955 to 1986. That heating rate is equivalent to five Hiroshima bombs being detonated in the water every second.

Peak emissions are closer than you think (Bloomberg) 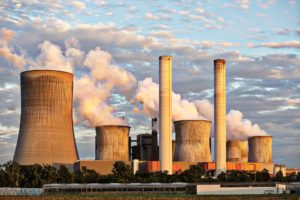 On a more positive note, one of Bloomberg’s senior analysts, Michael Liebreich is optimistic (sort of) that the coming decade will see the world “hit peak greenhouse gas emissions and start to see a modest but meaningful decline”.

He points to BNEF research that shows some two-thirds of the world’s population already live in countries where wind or solar are the lowest-cost forms of generation. Although renewables only generate 8.5% of global electricity today, he expects that figure to be closer to 25% by 2030.

Liebreich’s positive outlook is also founded on improvements in energy efficiency, falling costs for renewables, mass adoption of battery storage and changing attitudes in corporate boardrooms. Plus a few other things (go and read the whole thing).

Evidence to support Liebreich’s view came with the unexpected news that CO2 emissions actually flattened in 2019 following two years of increases. Everyone was braced for a third successive rise, so this came as a welcome surprise.

HIGHLIGHTS AND INSIGHTS FROM THE LAST FEW MONTHS AT CLEANEARTH HQ

Our completed solar installations have also been consistently exceeding their forecasts, giving greater financial and carbon savings to our clients – and encouraging some of them to come back for more.

This year has maintained the momentum, with over 1 MW of rooftop solar being built out in Q1 and a good pipeline further into the year.

There’s more detail over here about our current solar developments and our thoughts on the wider market.

New turbines in Wales and Scotland 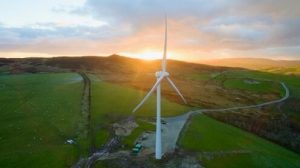 We have three very different wind projects in development. Two are new turbines while the third is bringing into commission a pair of turbines that were built in 2016 but never connected to the grid.

There’s a similar pattern here to our solar PV business, in that CleanEarth’s growth in wind generation is not being matched by the overall UK market.

While we’re adding 8 MW with these projects (and have another 40 MW potentially in the pipeline), the rate at which onshore wind is being deployed across the country has actually declined for two years running.

CleanEarth’s MD, Dean Robson, offers his views on why this is happening, along with some more details on our current wind projects.